Have you ever heard a song on the radio an instantly been transported to a different time in your life? Perhaps you are reminded of your first kiss, a funny story or an important event. Music has a powerful ability to jog our memories and connect us to the past. So powerful, in fact, that it’s being used to help those suffering with dementia.

Benefits of Music Therapy in the Treatment of Alzheimer’s 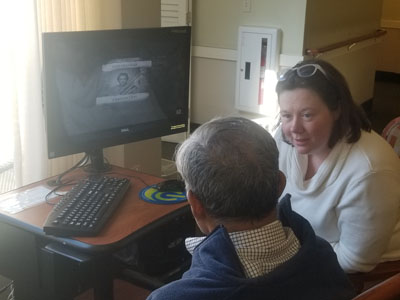 While there is still no cure-all for Alzheimer’s-related symptoms, music has been proven to make living with many of those symptoms more manageable. In fact, new research suggests that music may boost brain activity, alleviate anxiety, and even help dementia patients recall memories and emotions.

Music stimulates many parts of the brain, including those that affect language, mood, movement and even the senses. While singing activates the left side of the brain, listening to music activates the right side, and watching a concert or live musicians engages the area involved with vision.

Because music affects so much of the brain, it can touch on parts that may not be damaged by Alzheimer’s, and patients who are normally withdrawn or unable to communicate may suddenly become talkative and animated.

Disorientation and anxiety are common occurrences for dementia patients who frequently find themselves in a world that is unfamiliar. Music, however, has the ability to calm patients and can help caregivers manage stress-induced agitation.

When used appropriately, music can shift a patient’s mood and stimulate positive interactions. It’s as if the music is transporting them to a happier place or, alternatively, as one scientist noted, “The music is like an anchor, grounding the patient back in reality.”

Because music requires little to no mental processing, it can evoke emotion even in advance-stage Alzheimer’s, and emotions can, in turn, summon memories. A visible change often takes place when Alzheimer’s patients are exposed to music from their youth. They may perk up and be able to vividly recount memories from their past, or respond with humming, singing, clapping and swaying.

In early stages of Alzheimer’s, playing music while patients perform everyday activities may even improve cognitive ability over time. With enough repetition, the patient may be able to recall the activity when prompted by the same song in the future.

In the later stages of Alzheimer’s, patients may disconnect from their surroundings and lose the ability to communicate with others verbally. Music, however, can help bridge this gap. Since musical aptitude and music appreciation are two of the last remaining abilities in Alzheimer’s patients, music can help caregivers and family reach beyond the disease and connect with the person.

Many patients experience increased eye contact and physical touch, including hugs and kissing, when exposed to music, providing family and caregivers with an alternative route for communicating with patients who have Alzheimer’s disease.

The promising results of music therapy for dementia care have prompted Memory Care at Eddy Hawthorne Ridge in East Greenbush NY to offer a large variety of musical opportunities, including therapeutic drumming, Latin music, monthly visits from a musical therapist and, of course, lots of sing-a-longs. In addition, our nursing team consults with each family and resident to determine musical preferences, and works one-on-one with residents to ensure they are receiving the maximum benefit.

“The use of music is particularly helpful for lowering-functioning residents who appear stuck in their own head, or are unable to clearly communicate,” says Christine Kirk, Activities Supervisor of Memory Care.

One of those residents is Kathy, a music teacher who previously taught voice and piano lessons to young children. 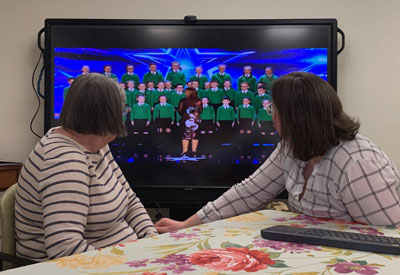 “While Kathy loves all music, her daughter suggested that nursery rhymes and classic Disney songs and themes would evoke the most memories,” explains Christine. “For most of our residents, the actual recording of the specific song seems to work well, but for Kathy, I found that when we sang together it really brought her into the musical moment.”

In addition to the research that’s being done on music and memory impairment, music is often incorporated into the treatment of anxiety and depression. As a result, Eddy Senior Living uses music to provide emotional support to any resident who is having a bad day, and encourages all independent senior living and assisted living residents to create playlists of songs that bring back “happy memories” for times when they are struggling.

Eddy Hawthorne Ridge and Eddy Memory Care at Marjorie Doyle Rockwell Center offer specialized care and a variety of therapies to serve individuals with early- to mid-stage memory loss, Alzheimer’s disease and other related dementias. To learn more our memory care communities in Cohoes and East Greenbush NY, call (518) 280-8385 or contact us.