Choosing the right senior living community requires careful research and planning. In addition to cost, you’ll want to consider the campus and its location, the size and layout of the apartments, the staff, the availability of services and amenities, and the food and dining options. You’ll also want to understand what it’s truly like to live in the community.

If you’re contemplating a move to Beverwyck, and you’re wondering what daily life is really like, read on to hear from residents who have made our Slingerlands senior living community their home.

Remember your college years? Time spent learning new things, taking trips, making new friends? Well, according to Richard and Joanne G., living at Beverwyck senior living community in Slingerlands NY is a little like that. “You have a dining room and you have courses, but you don’t have to take exams,” jokes Joanne. 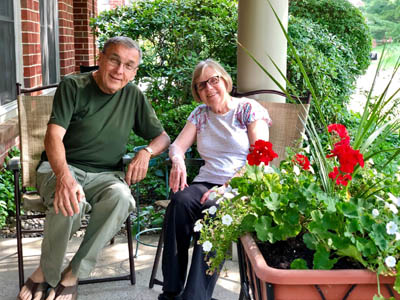 She also alludes to the diversity on the Beverwyck campus, one of the things she loves about living here. “To the outside world, it might seem like all the residents are the same, but our life experiences and personalities make us diverse.” Not unlike a college campus.

Richard agrees that the residents and staff are among his favorite things about Beverwyck. “At this time in one’s life, you don’t expect to make a lot of new friends, but we’ve made many,” says Richard. “When you sit down to eat together, take classes and trips with each other, and exercise together, it’s really a very special thing.”

“And the staff, the staff is just excellent,” says Richard.

“Their attitudes and the way they treat all of us, it makes a big difference,” adds Joanne.

In addition to socializing, Joanne and Richard enjoy the many activities, trips and wellness programs that are offered at Beverwyck. Richard participates in group fitness classes three times per week, and he’s set a goal of reaching 10,000 steps every day for a year. “I’m on a 286-day streak,” he offers proudly.

Both Joanne and Richard are enrolled in art classes in the campus art studio and attend wine tasting events, as well as monthly music and speaking engagements. They also enjoy the many trips offered to Beverwyck residents. Their favorite was an overnight outing to Cold Spring and Fishkill NY, which included a boat tour on the Hudson River and a delicious dinner at a local Italian restaurant. 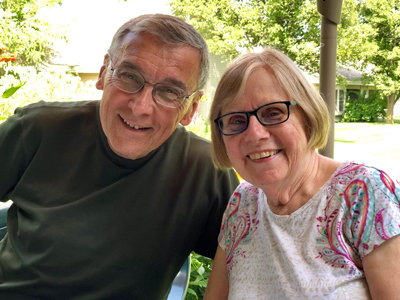 Like many independent senior living residents, Joanne and Richard also maintain an active life outside of Beverwyck. The couple attends sketching classes at the Albany Institute once a month, and both remain active in their church community. “I still volunteer once a week at the Albany International airport,” adds Joanne. Now in her 21st year, she volunteers at the help desk in the gating area.

Another interesting piece of Joanne and Richard’s story is that they went on the waiting list for Beverwyck in March of 2011, but they didn’t move into their cottage until December 2015. This is often a surprise to prospective residents, who make an appointment in September expecting to move in before the snow flies. Even if you aren’t ready yet, it makes sense to take a tour and, if you love everything about Beverwyck, put your name on the waiting list. This way, you can be selective with your preference, rather than settling for whatever is available.

Living Life to its Fullest

For Lynne G., a resident at Beverwyck since 2015, retirement hasn’t been as much about slowing down as it has been about having the time to do more of what he enjoys. In fact, that’s a common occurrence at Beverwyck. Unlike, the traditional image of “old folk’s homes”, Beverwyck is a very lively community of active seniors with no shortage of things to do.

Lynne’s favorite trip to date was an overnight outing to Woodstock VT. “I was a city planner for Vermont in my career, and Woodstock was part of my territory,” explains Lynne. “It was great to visit my old familiar hunting grounds.”

He also loves the variety of music programs here – the choral groups, the pianists who perform – in part, because of his upbringing. “My mother came from a family of 5 siblings, and their mother encouraged each one of them to learn to play a musical instrument,” recalls Lynne. “Her brother was given a trumpet that had belonged to Bix Beiderbecke because it was felt that he was so accomplished.”

But it’s the fitness programs that are at the top of Lynne’s list of favorite things to do at Beverwyck. “I’ve done as many as six different classes in a week,” Lynne admits. “I’ve tried Tai Chi, water aerobics and more – the variety is huge.” He also appreciates the different skill levels of classes that are available.

“And Carlie is a gem!” Lynne says of Beverwyck’s popular fitness coach. “Her ability and knowledge are apparent, but she also knows the science behind something as simple as why we should stretch in a certain way following our workout. She’s a pleasure to work with. Always energetic and smiling.”

In fact, for Lynne, the people – the staff and the residents – are the best part of living at Beverwyck. “I’m impressed by the depth of just how much the staff will help one another out for the benefit of all the residents,” says Lynne. “No one stands behind bureaucracy and says, ‘It’s not my job’. They do whatever needs to be done to help residents.”

He also acknowledges the warmth and welcoming nature of the residents. “People are accepted,” notes Lynne. “All of us have been through the ‘introductory phase’ of moving in so we reach out to newcomers to make them feel welcome.”

It’s also the comradery of fellow residents, who are “just fun to be with,” according to Lynne. “It’s a rarity when I sit down to dinner and don’t have a stimulating conversation with someone.”

Take a Tour of Our Slingerlands Senior Living Community

See for yourself all that Beverwyck has to offer. Call 518-280-8385 or request a tour of our senior living community in Slingerlands NY.